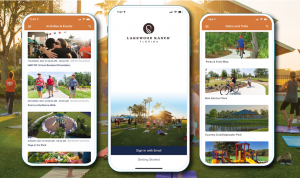 One company is building mobile applications to bring a deeper sense of community and communication to master-planned communities.

Bozeman, Montana-based real estate technology company Alosant is a pioneer in the burgeoning category of mobile apps for master-planned communities—sprawling developments that feature an array of amenities, such as schools, workspaces, shops, restaurants, bars, and golf courses.

Since 2017, Alosant has developed branded apps for more than 60 master-planned communities across the U.S., including some of the largest such as Lakewood Ranch and Rancho Mission Viejo. The apps cater to current and future residents, as well as people who work in the communities or who patronize stores, restaurants, and other amenities.

April LaMon, co-founder and CEO of Alosant and a member of ULI’s Lifestyle Residential Development Counci, said master-planned communities have largely been behind other residential real estate sectors—namely the multifamily segment—in trotting out mobile apps.

“Yes, you’re getting your house, but you really are buying into a much broader lifestyle for yourself, for your family, and have a much higher desire to really become an active member of that community,” LaMon said of master-planned communities.

LaMon wasn’t in the app-building business back in 2017; she specialized in behavioral analytics surrounding website traffic. But that soon would change. That year, Paul Johnson, who spearheaded the design and rollout of the Rancho Mission Viejo master-planned community in Southern California’s Orange County, approached LaMon and business partner Mike Swanson about creating a branded app for the community.

According to LaMon, Johnson sensed the divide between Rancho Mission Viejo’s physical and digital environments—with mobile phones in the hands of seemingly everyone in the community—and tapped LaMon and Swanson to close that gap. In the fall of 2017, the community launched the RanchLife app, developed by LaMon and Swanson and their team. Within 90 days, LaMon said, the app racked up about 2,500 active users, representing a little over 90 percent of the community’s residents.