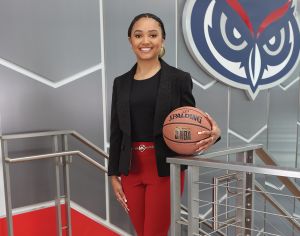 Shyra Johnson had a clear goal in mind: “I always knew I wanted my own sports agency by the time I was 30.”

To the average person, this may sound like a lofty aspiration. But Johnson has never settled for average. She bested this goal by nine years when, in early 2022, the FAU graduate student passed the National Basketball Players Association Agent Certification Exam at 21, becoming the youngest certified sports agent in history. She had already started Team Empire Sports, her own agency, where she now represents a roster of 10 to 15 athletes.

“They’re coming from all over; they have the most amazing stories,” Johnson, now 22, says.

“There’s a lot of ethnicity, I would say. I have a young woman who’s a gymnast, who is from China. I have a lot of individuals from different parts of Africa—Ghana, Nigeria. And they cross different sports.”

Johnson is acutely aware of the relentless drive required to succeed in professional sports. It’s a mindset she has shared, from academics to athletics to business.

The youngest of three children, she grew up in Ocala, Florida, to parents who treated scholastic achievement as paramount. “You couldn’t get less than a B,” Johnson says. She became one of only three straight-A students in her middle school while excelling in a variety of sports, from cheerleading and basketball to track and tennis. (Athletic prowess runs in the family; one cousin, Tameria Johnson, plays college hoops for the University of Delaware, while another, Tony Johnson, is a wide receiver for the FAU Owls.) Her father seeded the career choice of sports representation when she was 14, and she has approached the vocation with a single-minded focus. “I was thinking of [studying to be] a doctor or a lawyer, but I knew that whatever I chose, I’d be really good at it,” she says.

She gravitated to FAU for its lifestyle and access to talent and capital. But it was her acceptance into the Kelly/Strul Emerging Scholars Program that fostered the environment for her to pursue her dreams. The program allows outstanding, first-generation, financially strapped students such as Johnson to graduate debt-free.