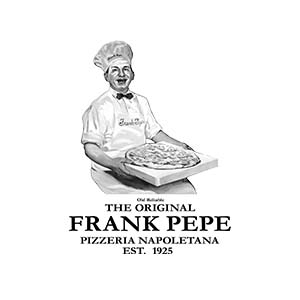 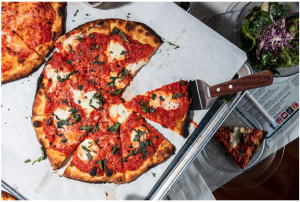 New Haven pizza, with its crispy, charred crust and flavor-packed signature toppings, has landed in Alexandria. Frank Pepe’s descendants have brought their pilgrimage-worthy pies to Northern Virginia in a setting that replicates the flagship 1930s Wooster Street location. Like in all 14 offshoots, guests can watch pizzas being assembled on long-handled, paddlelike peels and baked in a coal-burning oven from a dining room decked in dark wooden booths and family photos.

The owners’ grandfather, who immigrated to America as a teenager, first worked as a baker in New Haven. His pizza operation got its start when, at the suggestion of a friend who sold tomatoes, he spread some on his baked flatbread. Selling these simple pies from a handcart, Pepe and his wife, Filomena, created an institution that has been on food-lovers’ bucket lists for decades. The restaurant follows the original formula to this day: crushed tomatoes with a touch of grated pecorino and olive oil.

Another Pepe original is the crowd-favorite clam pie. For decades, the pizzeria sold local clams on the half shell with hot sauce and vinegar as an appetizer. In the 1960s, Pepe changed his approach, his granddaughter Jennifer Kelly remembers. He began to chop the fresh clams and put them on the flattened dough with a sprinkling of oil, pecorino cheese, plus a touch of garlic and oregano, she explains. The simplicity of the recipe belies the deliciousness of the widely copied result.