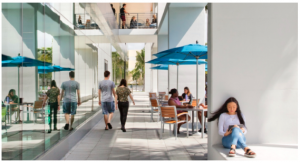 New students arrived at Lynn University last week, 785 first-years and 100 transfer students. Both numbers are up from last year, when Lynn welcomed 759 freshmen and 86 transfers. Over a decade, the overall increase for new students is 59 percent, with the number of freshmen up 86 percent.

So how did Lynn increase those numbers, and keep those figures increasing despite the pandemic (which did cost Lynn students in the fall of 2020)? Despite Lynn being not well-known? Despite being located in Boca Raton, a desirable location, but still in Florida, which some admissions experts say could be undesirable for some students because of Governor Ron DeSantis, a Republican, and the laws he has been trying to pass (and enforce) against abortion and, many think, against academic freedom?

The answer is largely that Lynn believes, truly believes, in holistic admissions. And Lynn believes in not worrying too much about numbers—at least those that other colleges may rely on to measure a student’s merit.

Gareth Fowles, vice president for enrollment and university advancement, said that Lynn believes in constantly getting to know better the applicants and their counselors in high schools. He’s a perfect example of how Lynn recruits students. A member of Lynn’s Class of 1999, he was recruited from his hometown of Pietermaritzburg, South Africa, to play soccer at the university. He originally worked in advancement at Lynn, then moved to admissions and this year is in charge of both areas.

“We truly try to connect with people wherever we can,” said Fowles. “That can mean at meetings of counselors, or visiting high schools and traveling all over the world.”

With COVID-19, he said Lynn expanded its video offerings about everything: how to submit a competitive application, financial aid, different majors, careers for graduates, athletics, other extracurricular activities and more.