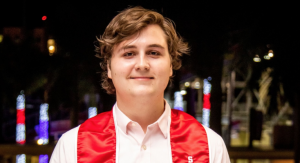 Ninety percent of low-income, first-generation college students do not graduate in four years, according to an EAB study. However, students in Florida Atlantic University’s Kelly/Strul Emerging Scholars Program regularly defy these odds.

Connor Manford developed a love for business while working at a local golf course in high school. Since then, the first-generation student has been dedicated to building a career as a marketing guru.

The Kelly/Strul scholar spent most of his time on campus gaining hands-on experience through various internships. His time at Essencia Air taught him how to build a brand’s social media presence, while working with Keller Williams Realty showed him how to oversee administrative responsibilities. Both internships led him to a third internship at Scientific Instruments, where he was challenged to think outside of the box and step out of his comfort zone.

He was so successful, Scientific Instruments offered him a full-time position upon completion of his B.S. in Business Administration with a concentration in marketing. The Palm Coast native is now an inside sales and marketing coordinator where he works on a multitude of projects ranging from advertisements and social media to e-commerce and email correspondence. 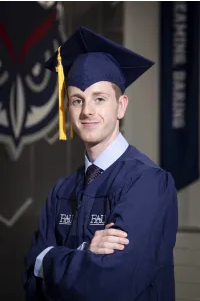 Program, according to a news release.

At 9 years old, Browne knew exactly what he wanted to become – a broadcaster, and was inspired by Joe Buck’s play-by-play of the 2009 World Series, the release says.

As a member of the Emerging Scholars Program, Browne earned a Bachelor of Arts in multimedia studies, and served as the voice of FAU baseball and football, eventually becoming the sports director for the station.

Browne also had the opportunity to work in NFL Super Bowl Radio Row in Miami in 2020 and in Tampa in 2021, interviewing players and media sportscasters.

He also launched his own show, Strictly Sports on Owl Radio, and interned at SiriusXM PGA Tour Sports Programming.

Browne now is the play-by-play broadcaster for the Forest City Owls in Forest City, North Carolina, where he announces every baseball game, hosts the pre- and post-game shows, and conducts interviews with players and coaches.