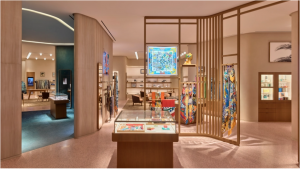 AVENTURA, Fla. — Despite being Florida’s largest mall at 2.8 million square feet, Aventura Mall is having difficulty keeping up with demand, particularly in its booming luxury sector.

Hermès, Ferragamo, Balenciaga, Burberry Kids, Vilebrequin and Ralph Lauren have opened or plan to open stores by year’s end; Gucci expanded to 6,000 square feet for dedicated men’s and children’s sections; Ferrari is also expanding; Alexander McQueen pops up soon; Bulgari and Rolex partnered with Mayors for shops-in-shop with their own separate entrances, and several former tenants, like Anne Fontaine, have returned.

“We don’t have the space to accommodate brands in the places they want to be, so we’ve expanded the luxury wing to the center court,” said Jackie Soffer, chairman and chief executive officer of Turnberry, the mall’s majority owner. “We’re moving tenants who are doing well and want to size up or want different co-tenancy. I can’t discuss it now, but many brands have requested more space or to open. We’re just trying to make it all work.”

Hermès, which operates a store in the Miami Design District, expanded to meet Miami’s population explosion and strong sales. Its second location in northern Miami-Dade County also connects with a whole new client base, according to Hermès USA president and CEO Robert Chavez.

“Aventura Mall has evolved into a shopping destination. Its traffic is strong and consistent, and we felt the majority of its shoppers were not necessarily shopping in the Design District,” he said.

Hermès’ 4,700-square-foot store isn’t a flagship but represents all categories. Chavez said the two Miami stores differ in layout — the Miami Design District being a tri-level, freestanding building with a rooftop terrace, compared to one floor in a shopping center — and vibe.

“The Aventura Mall store evokes more of a Floridian beach feel,” he said, regarding its pink terrazzo floor and sand-colored carpets. “We anticipate to sell a lot more accessory categories, such as scarves, enamel bracelets, belts and shoes due to the strong and consistent traffic that comes through the shopping center.”