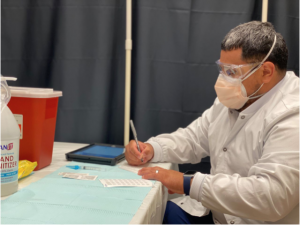 STATEN ISLAND, N.Y. — Kenny A. Villatoro had seen the darkest side of the pandemic, so he jumped at the chance to head toward the light.

As a personal care aide, Villatoro saw first denial, then terror and hopelessness in the eyes of the patients he treated in the Critical Care COVID Unit of Staten Island University Hospital during the first agonizing months of the coronavirus (COVID-19) pandemic, all while he pursued his nursing degree.

He even caught and battled the virus himself.

Then, after graduating from the St. Paul’s School of Nursing — and just days after passing his nursing boards — he began vaccinating people against the virus.

“I wanted the other perspective of it,’’ he said. “Not just doing CPR on a patient that needed it, but also looking at it from the other spectrum, knowing we can get ahead of this virus — not allow them to get to the point where they have to experience that.”

Villatoro, a Brooklyn resident, is one of 20 August 2020 graduates of the Bloomfield nursing school, formerly St. Vincent’s School of Nursing, to jump right into the prevention effort by joining COVID-19 vaccine teams.

“I needed to be a part of this movement,’’ he said. “While it’s not the best of circumstances, we are part of history.’’

David Smith, president of the nursing school, said he couldn’t be more proud of his graduates, who’ve stepped up to fill the need in vaccine distribution before they received their nursing licenses. Once they pass the exams, nursing job placement is almost instantaneous, he said, and the jobs are anything but glamourous.

“They’re on the front lines,’’ Smith said. “They’re the ones that are saving lives.”

Villatoro, 37, has five years of healthcare experience. Having survived COVID himself empowered him to better care for the frightened patients who might have otherwise given up, he said.