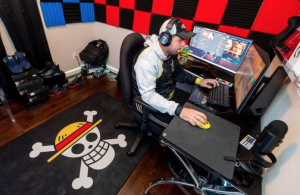 WATERBURY — Online video games have become more than just a fun pastime for a U.S. Army sergeant who is enrolling to earn a degree in gaming and esports management at Post University.

“The growth of esports is happening at such an exponential rate and it’s more than just playing games,” said Michael Leonardi, a Thomaston native stationed at Fort Campbell, Kentucky.

Leonardi plans to start his first class online this semester and return next fall for on-campus courses and a more rigorous schedule after ending his Army tour in August. His wife Jaime is a recruiter in the Waterbury office of the Connecticut Army National Guard.

University officials said the school is offering programs leading to both bachelor’s and master’s degrees in gaming and esports management.

“We knew that demand existed and it was a matter of building it so that they could come,” said Dean Jeremi Bauer of the Malcolm Baldrige School of Business. With the program beginning this year, it will take a few years until the first degrees are awarded, he said.

Large-scale esports tournaments are happening on the internet with players now often competing from home because of COVID-19 restrictions on mass gatherings.

These games can involve junior high and high school student teams as well as college and postgraduate professional teams. Individuals also play randomly with each other.

Online platforms such as Faceit, Battlefy and World Gaming Network allow users to join matchups as independent players or go in as teams, according to The Washington Post. Although many gamers play just for the thrill, some online tournaments frequently award cash prizes.

Bauer and Roger Caramanica, Post’s program chair for gaming and esports management, said gaming has developed into a $1 billion industry fed by many tournaments, spin off industries needed to support gaming and a variety of sponsors showing advertisements to gamers and viewers.

Recent industry estimates of esports revenue streams suggest that the nearly $1 billion is also likely to be made up from media rights, publisher fees, merchandise and tickets, digital rights, and streaming.

“The business of gaming is real. That is why we have made this a business degree first. You can make making gaming your career,” said Caramanica, who first was hired by Post to consult on putting the program together and has now joined the faculty to launch it.

Through the curriculum, students will learn the traditional business disciplines through the lens of esports, a language this generation understands and is excited about, said Post University President John L. Hopkins said.

“We want our students to be in the business of inventing the future, and these new programs will train students who do just that,” he said.

Major core program elements focus on the history of the industry, the psychology of gaming, new media and streaming, business development and industry economics, Bauer said.

Students who purse this academic program can choose between two concentrations, entrepreneurship or event planning and management. They must complete a required internship or capstone projects, in both bachelor’s and master’s programs, to demonstrate applied knowledge of the skills learned while in the program.

CALL: 954-251-6210
Fill out below and receive a consultation from our expert communications team:
×