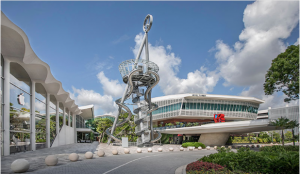 In 2019, more than 9,300 retail stores closed in the United States alone, according to Coresight Research. One of the largest new malls set to open in 2020, the American Dream in northern New Jersey, has had to further push back its plans to open due to concerns about COVID-19 and lack of tourism in the New York City area. But South Florida’s Aventura Mall has continued to reinvent itself as a retail destination despite the shifting economic tides.

First opening its doors in 1983, Aventura is now the largest mall in Florida, adding 315,000 square feet (29,200 sq m) in 2019, and averaging more than 28 million visitors each year. With a steady traffic stream bolstered by both the local community and Miami’s bustling influx of tourists, Aventura Mall has developed an ability to attract shoppers that most mall owners cannot quite replicate.

Aventura Mall itself was forced to close its stores in mid-March, and reopening to the public in May. The shutdown and perceived consumer fear that lingers after the pandemic’s initial peak did little to quell Aventura’s appeal. The Miami Herald reported long lines for popular retailers like Zara for Memorial Day weekend.

As part of the reopening plan, custom-designed masks were

available to staff and customers.

According to Jackie Soffer, the chairman and CEO of Turnberry Associates and the principal owner of Aventura Mall, Aventura’s success is attributed to its continued focus on the physical realm. Simon Property Group also has a stake in Aventura. While many shopping centers have combated increasing competition from e-commerce channels by fusing digital technologies with the social-media hashtag driven “in real life” experiences, Aventura has also focused on creating tangible experiences that are inextricably tied to what consumers want to see. As the New York Times headline stated in January, “Dying Malls? This One Has Found a Way to Thrive.”

“We always try to have our finger on the pulse of what consumers want,” says Soffer, explaining how the center makes decisions regarding its additions and expansions. “We look at which brands are hot and what does well on the property. What happens in Miami and what people want to purchase in this market is also different from a lot of other U.S. malls. We look at what’s going on with other lifestyle centers and community events; we examine the top online brands and trends; we follow Instagram, Snapchat, and Tiktok.”

From adding a nine-story, two-chute towering slide created by visual artist Carsten Höller—one that sends visitors soaring 93 feet (28 m) down a winding corkscrew slide—alongside a number of other public art pieces; to a new dining hall that features buzzy new outposts alongside beloved local favorites; and pop-up Instagram museum experiences like Candytopia, Aventura has proved that its instincts-meets-insights approach keeps the center on its toes.

Over its nearly 40-year trajectory, Aventura has made important capital improvements that have allowed it to transform from a typical neighborhood mall into a destination for global consumers seeking both high- and low-retail options. The mall has undergone a significant expansion each decade of its existence—in 1997, 2008, and most recently 2017—increasing its total square footage from an initial 1.2 million to 3 million (111,500 to 279,000 sq m), to today containing 311 stores over two floors to accommodate the shifting needs of the Miami market. Despite such an enormous expansion, Aventura Mall boasts nearly 100 percent occupancy, according to its parent company Turnberry and outside analysts.

Even for a successful mall in a class A market, that occupancy rate is incredibly impressive, says Mark Hunter, managing director at CBRE who oversees large retail platforms across the Americas within the commercial real estate firm. “Generally speaking, you’re seeing a 94 percent occupancy at most malls,” Hunter notes.

Aventura’s success can likely be attributed to its willingness to adapt its offerings to suit consumer needs. “We’ve always looked at the center as the heart of the community and the place from which we drew from,” says Soffer. “So as that community’s demographic and customer base changed, so did our inspirations for new additions.”

As Aventura’s residential landscape evolved from a more middle-class neighborhood to one with towering luxury condominiums in nearby communities like Williams Island and Sunny Isles Beach, the mall began its own transformation. While its original anchor department stores were the likes of Sears and JCPenney, and its typical tenants included stores like Lenscrafters, the Limited, and Gap, Aventura was slowly able to attract higher-end and edgier retailers to suit the tastes of its evolving clientele. Bloomingdale’s and Nordstrom were added, along with luxury retailers like Louis Vuitton—an initial major coup for the mall.