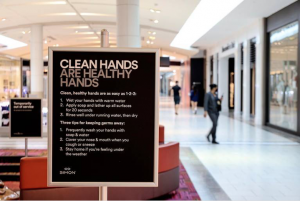 It took a pandemic to make snagging a good parking spot at Dadeland Mall easy.

Two hours after the massive indoor mall’s post-coronavirus reopening Monday, only a couple of dozen people walked through the gleaming 1.4 million-square-foot mall. More than 80 percent of its 185 stores and restaurants remained closed.

Dadeland’s two giant anchor stores, Macy’s and Saks Fifth Avenue, were still shuttered. (Update: Saks will reopen its Dadeland location on Wednesday, May 20.) Nordstrom, the mall’s former third big store, is closed permanently — one of 16 locations around the U.S. the retailer shut down due to lagging sales exacerbated by the COVID-19 lockdown. (The chain announced that its remaining existing locations, including two in Boca Raton and two in West Palm Beach, will reopen on May 21. The opening date for the Merrick Park store has not yet been announced.)

The desolated mall made for a surreal sight. The usual line of patrons waiting outside The Cheesecake Factory wasn’t there: The restaurant is open only for delivery. The normally bustling Apple and Microsoft stores sat dark, looking lonely. Three salesmen made small talk inside the Shoe Palace shop, waiting for customers who had yet to materialize.
Play areas for children were roped off with tape. Haagen-Dazs was one of the few eateries open in the mall’s food court, but it was too early in the day for ice cream. Everyone — shoppers and employees alike — wore masks.

But despite the eerie quiet and darkened store fronts, some visitors on Monday said walking through the air-conditioned shopping mecca brought back a much-needed sense of normalcy.

“It feels good to be able to come back here, even though we’re not buying anything today,” said Lucia Perez of Pinecrest, who was walking the mall with her college-age daughter. “It gets us out of the house and we feel like we have the mall to ourselves.”

Here’s a list of the other malls in Miami-Dade County that opened May 18 or plan to open by the end of the week:

▪ Some stores and eateries at The Shops at Merrick Park, 358 San Lorenzo Ave. in Coral Gables, have also reopened.

▪ A limited number of stores and restaurants at Dolphin Mall, the largest outlet mall in Miami-Dade County, located at 11401 NW 12th St., will reopen at 11 a.m. Wednesday May 20.

▪ The upscale Aventura Mall, located at 19501 Biscayne Blvd., will reopen at 11 a.m. Thursday, May 21. Many of its retailers and its restaurants will offer curbside pickup or delivery.

▪ Brickell City Centre, located at 701 S. Miami Ave., will reopen in phases starting Friday, May 22. Dine-in services at its restaurants and food hall will resume on May 27.