Fogelman Collection Will Be Housed In New Museum in South Florida 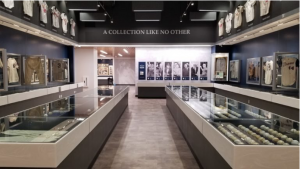 Avron B. Fogelman once was a part-owner of the Kansas City Royals. But the memorabilia collection the successful businessman has assembled is positively regal.

Fogelman, 79, has spent most of his life building a large memorabilia collection. Wednesday, he unveiled where his collection will be housed— in a 3,500-square-foot museum located on the campus of Florida Atlantic University in Boca Raton.

The museum will be open to the public beginning Feb. 18.

There are more than 1,200 pieces of memorabilia in Fogelman’s collection, including World Series memorabilia from 1985, when the Royals won their first Fall Classic. Fogelman was a part-owner of the team from 1983 to 1991.

But there is more, including some jaw-dropping relics.

One exhibit will contain the uniform pants worn by Washington Senators catcher Moe Berg — baseball’s most patriotic spy — from the 1930s.

The Berg memorabilia serves as a bridge between sports and history, and Fogelman is eager to share that knowledge.