Dying Malls? This One Has Found a Way to Thrive 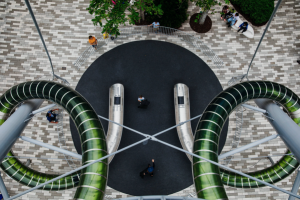 Aventura Mall, near Miami, isn’t shy about investing in its infrastructure and is widely considered one of the most successful malls in the country.

Some retailers have turned to extras like virtual-reality headsets and touch-screen mirrors to give shoppers an experience they can’t get online.

Aventura Mall, a shopping complex between Miami and Fort Lauderdale, is using a nine-story slide.

The double-chute tower, which began offering rides in 2017, invites children and adults to grab hold of mats, rocket around corkscrew turns and whoop 93 feet down.

In emphasizing low-tech entertainment over cutting-edge gadgetry, Aventura is betting that brick-and-mortar retailers can beat online vendors without having to play their game. The mall’s owners, Turnberry Associates and Simon Property Group, have also installed whimsical sculptures, a terrace-lined party venue and carnival-style games of chance.

And as unlikely as it is for a 37-year-old property filled with chain stores to be at the forefront of anything, Aventura may have stumbled on a winning formula. With nearly a 100 percent occupancy rate, according to Turnberry and outside analysts, the mall is widely considered one of the most successful in the country, which may be particularly notable as store closings mount.

Sears and Kmart, which have the same parent company, have shut down about 3,500 stores in the past 15 years, and will soon close 100 more, according to a November announcement. Macy’s has announced more than 100 store closings since 2016, and Toys “R” Us liquidated all of its locations in the United States, about 800, in 2018. And this month, Pier 1 Imports said it would close about half its stores, or 450, as it weighed bankruptcy.

Despite the struggles that physical stores face, the number of enclosed malls in the country has grown, clocking in last year at 1,170, which was higher than at any point in the last 50 years, according to the International Council of Shopping Centers, a trade group. Some malls have gone out of business and have even been demolished, but others continue to take their place, according to the trade group, suggesting that the death of the mall has been exaggerated, as Aventura can bear out.

“If any mall did as well as Aventura, their owners would be very happy,” said Steven Henenfeld, a Miami retail broker with Colliers International, who is not affiliated with the property. “And when all you ever hear about are malls going dark, Aventura really is an anomaly.”