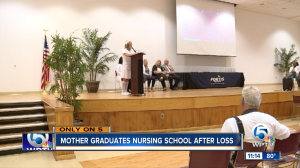 PORT ST. LUCIE, Fla. — A local mom graduated from nursing school at the Fortis Institute Tuesday night, but her path to the graduation day was filled with challenges much bigger than bookwork and tests.

Shayna Berkowitz, 24, celebrated becoming a Licensed Practical Nurse with her fiancé and her young son, Mason.

“You have no idea how great today felt,” Berkowitz said.

But, it was a family celebration that wasn’t quite complete. They were missing one part of their family.

Berkowitz was in her final semester of nursing school when she gave birth to her daughter, Madison.

Finishing school with a newborn baby posed its own challenges.

“I had maybe six weeks left before I had to take my exit exams,” Berkowitz explained.

But, the stress of school soon became the least of her worries.

Madison was just days old when Berkowitz checked on her one morning.

“I went to go feed her and she was just purple. Lifeless … I literally just got up and started doing CPR and told my fiancé to call 911,” Berkowitz said.

“She had an infection that was unbeknownst to anyone.”

Her teachers became a support system urging her to take time to cope, despite the pressure she put on herself to keep working towards graduating.

“I wouldn’t have been able to do it. It’s just not something anyone is capable of doing,” Berkowitz.

She returned after a three-month break, finishing school with more motivation to do the job she was working toward. She wants to help and work with moms and babies.