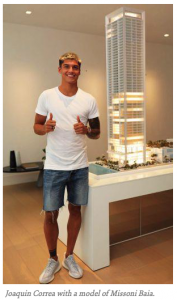 Argentine soccer star Joaquin Correa put a condo under contract at Missoni Baia, a 57-story project under construction in the Edgewater neighborhood of Miami.

The developer, OKO Group, declined to disclose the price Correa contracted to pay but said the type of unit he reserved has been priced in the range of $1.5 million to $1.7 million.

Correa, 24, is a midfielder for Rome-based soccer club SS Lazio and has scored five goals since he joined the Serie A team last year. His team was the champion of the Copa Italia 2018-2019 tournament, during which Correa played in four matches and scored two goals.

He isn’t the only acclaimed soccer player who has put a unit at Missoni Baia under contract.

Colombian soccer star Miguel Borja, a professional player with the Brazilian club Sociedade Esportiva Palmeiras, recently reserved one of the 249 units in Missoni Baia, which is expected to open for occupancy in 2021.

The project’s ample amenity package includes a spa, an Olympic-size swimming pool, private cabanas, a children’s pool and tennis courts, plus a 1,700-square-foot gym with 180-degree views of Biscayne Bay, a dedicated yoga room and separate Pilates room, and a spa for pets.