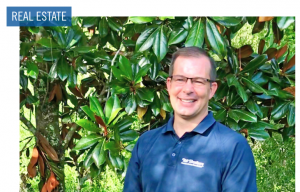 With low unemployment, a good economy and population growth, he says it should stay that way.

“We have been in Jacksonville since 2006 and have seen incredible growth and opportunity,” Merten said.

Toll Brothers, based in a suburb of Philadelphia, is a Fortune 500 public company founded in 1967 that operates in 22 states. He said that brings stability and resources to the local market.

Merten said Toll Brothers is buying more area land for development. In Duval County, it’s building on 266 lots in the Edison community of eTown east of Interstate 295 and Florida 9B.

“We feel strongly about the Jacksonville economy,” he said.

“I think the challenge for all builders right now is land as well as development costs,” Merten said.

The recession of 2007-09 hit the real estate market hard, leaving a large supply of lots entitled for development. Merten said those have been worked through, with some bought for pennies on the dollar.

“It’s going to be interesting in the next few years to see all the builders compete,” he said. “Everybody will be on the same playing field of costs.”

Development costs rise with new regulations and labor and land prices, he said, while “material costs right now have leveled out and they are more predictable. We will see over time.”

Merten said Toll Brothers would like to get to a lower price point, but is limited by land, development and construction costs.

“It’s difficult to get to a lower price, so $300,000-ish is probably the strike point for us. Anything lower than that is difficult for us,” he said.

In addition to labor costs is the challenge of finding skilled workers in the first place.

“The main challenge for us is finding qualified trades that can do the work. Labor issues make the process of building a home take a month or two longer. We have had to look at more trade groups from different areas so we are diversifying,” Merten said.

Toll Brothers focuses on the buyers during the design phase and the company has 40 new home plans coming to market next year.

“We are always trying to meet the trend or be on trend,” Merten said.

Customers are looking for open concepts, high ceilings and contemporary styles that have clean looks, surfaces and colors, he said.

“Amenities are a primary focus of ours. We are seeing a trend in a blend of clubhouse and cabana and pool all-in-one. Outdoors in Florida is a big focus,” Merten said.