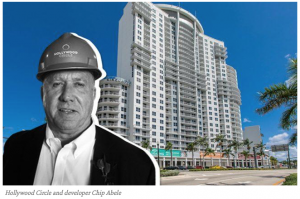 The financing, which comes from Athene Asset Management and Ace Global Multi-Credit LLC and other lenders, was used to pay off a $60 million construction loan from City National Bank and to provide working capital for the project, according to a release.

Abele, a founding partner of the Gold Coast Florida Regional Center, previously said that 76 percent of the $109 million in EB-5 financing for the development came from Chinese investors. Abele and his partners also contributed equity to the project, in addition to securing the $60 million construction loan.

In 2001, the developers bought 24 parcels to assemble the 3.2-acre site, including a 12-story building called the Town House Apartments. The site used to be home to a Greyhound Bus terminal, smaller apartment buildings, two gas stations, a Papa John’s, and vacant lots.

Gold Coast is also planning to develop another mixed-use project on the site of the former Great Southern Hotel, according to the release. The regional center also has offices in Coral Gables, South Africa, Shanghai and Hong Kong.

The Circ Hotel, managed by Trust Hospitality, includes a recreational deck with a swimming pool and Muse Rooftop Bar & Lounge on the 12th floor, and Olivia Restaurant & Bar in the hotel lobby. A Toi Spa, AT&T and UPS stores are planned for Hollywood Circle’s additional retail space.